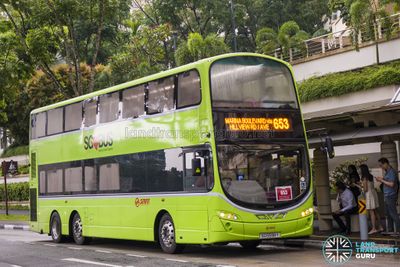 City Direct Services (CDS) are express bus routes between selected residential estates and the city. They were introduced under the Bus Services Enhancement Programme (BSEP) to benefit commuters travelling to the city with improved connectivity,

Nine new City Direct bus services ply from the housing estates of Ang Mo Kio, Bedok, Bukit Batok, Eunos, Hougang, Jurong East, Sembawang, Sengkang and West Coast to the Central Business District (CBD). With limited stops and the use of expressways, commuters using these services would have comparable journey time to taking a connecting bus or LRT service and transferring to the MRT into the city.

For a start, all the nine new City Direct services made two one-way trips on weekday mornings from the respective housing estates towards the CBD. Similarly, two one-way trips took commuters back home from the city in the evenings. More trips have since been added to the bus services depending on the demand for the services. The bus services operate on weekday peak periods excluding public holidays.

The move is in line with the Transport Minister’s announcement at the Committee of Supply 2013 to tap on the resources of private bus operators to run more City Direct bus services to augment the resources of the public transport operators (PTOs). Currently, express services 513, 850E, 951E and 982E are operated by PTOs and run parallel to train lines between estates and the city.