Difference between revisions of "Masjid Jamae" 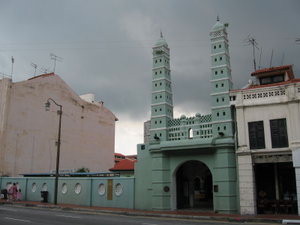 Masjid Jamae (Jamae Mosque) was set up by the Chulias, who were Indian Muslims from the Coromandal Coast of South India. They came to Singapore mostly as traders and money changers and set up three mosques within a short time; Jamae Mosque was the first. The other two are Al-Abrar Mosque and Nagore Durgha, both of which are on Telok Ayer Street.

In 1894, Jamae Mosque and Nagore Durgha were placed under a panel of court-appointed trustees, under which they remained until 1961. The Muslim and Hindu Endowment Board then took over the management of the mosque until 1968, when it handed the reins over to Masjid Ugama Islam Singapura (MUIS).

Despite two efforts to rebuild it, the present structure has remained more or less unchanged since it was completed in 1830. Jamae Mosque is skewed towards Mecca although the mosque's compound is aligned with the street grid.

Jamae Mosque's value as a historical site was crystallised when it was gazetted as a national monument on 29 November 1974.