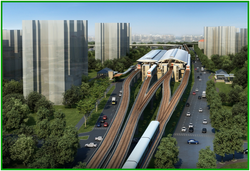 The Tanah Merah Modification Project (TMMP) was announced by Land Transport Authority (LTA) on 25 August 2014 which consists of an additional track and platform to allow trains arriving and departing towards Changi Airprot at a shorter intervals. Construction enhancements commenced in 2016 and is expected to be completed by 2024.[1]