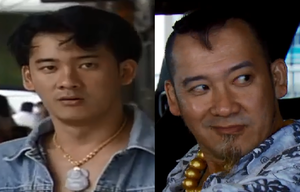 He is mostly typecast as a criminal or Ah Long figure in cameos, sometimes acting alongside Lee Nanxing. Notable exceptions include Mirror of Life 2, where he was a protagonist in in one episode, where he played a tontine banker who gets into debt with an Ah Long, Facing the Music where he had a cameo role as a CID officer, and On the Fringe where he appeared in several episodes as a supporting character.