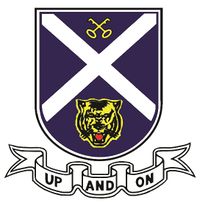 Saint Andrew's Secondary School is a government-aided Anglican all-boys secondary school in Potong Pasir, Singapore. It was established in the 19th century and still operates along traditional British lines. There are about 1,500 students.

The school's address is 15 Francis Thomas Drive, and the nearest MRT station is Potong Pasir.

The beginning of St. Andrew's School can be traced back to the 1850s, when a private institution was set up in Chin Chew Street by two Anglicans - Mr Sim Quee and Mr Tye Kim. As a result of the sermon on Whit Sunday 1856 by Rev Humphreys, a group of laymen formed themselves into a committee for the spreading of the Gospel in the then 37-year old Singapore.

One of the steps taken was to seek a missionary and this resulted in the arrival of the Rev. Edward Sherman Venn in 1861. The private institution of Chin Chew Street had no connection with the Anglican Church at that time - this was only brought about on 8 September 1862 when it was adopted by the Anglican Church because of the work and influence of Venn. Thus St. Andrew's School was founded on 8 September 1862 by Venn.

One year later, on 10 September 1863, the School moved to Upper Hokkien Street because of the need for a better building and more space for the growing school. Soon after, Mr Cheok Loy Fatt was appointed Headmaster.

For some years, the mission experienced serious financial difficulties, resulting in its withdrawing financial support for the school in 1866. The school suffered an even greater loss with the passing away of its founder. In spite of these losses, Cheok Loy Fatt carried on managing the school by himself.

In 1872 the Colonial Chaplain, Canon J.A. Beccles, applied to the Government for financial aid, which was granted, so that in May 1872 St. Andrew's School became a grant-in-aid institution. The growing school moved from Upper Hokkien Street to Victoria Street and then in 1875 to a four-acre site on Stamford Road.[1]

In the same year, Canon Beccles was succeeded by the Rev. George Frederick Hose as Colonial Chaplain. Meanwhile, the growing School shifted to Victoria Street. Hose did a great deal for the School. One of his first acts was to invite the Rev. William Henry Gomes from Borneo to act as School Superintendent. Under the guidance of Gomes from 1872 to 1902, the School prospered and grew.

Even as early as 1873, Hose and Gomes knew that the growth of the School would be hampered by poor accommodation. Their hard work was rewarded by the Government giving the School a 4-acre piece of land on the then Government Hill with a frontage on Stamford Road. The first building to go up was the Chapel in 1875 and in that same year, the School vacated its cramped premises in Victoria Street and moved into the Stamford Road site. Classes were held in the Chapel which also became an important centre of public worship.

By the 1920s the school's enrolment had reached 800 boys. In the 1930s a system of prefects was instituted, and the school in this period became known for its boxing[2] and Rugby.

A new, larger campus was opened in Woodsville in 1940.[3][4] More buildings were added in the 1950s, housing both the Junior School and the Senior School.

In 1986 the secondary school moved from Woodsville to a site in Potong Pasir across the Kallang River after the Woodsville buildings were deemed inadequate for the running of both the junior and senior classes. In mid-2003, the school moved temporarily to the old Victoria School building at Kallang Bahru before returning to new buildings opposite SAJS (Junior School) in 2005 as part of the St Andrew's Village project, which brings together in one complex the Junior, Secondary and Junior College campuses.[5]

Meanwhile the old school buildings have been conserved and strengthened for re-use as a church, winning an Honourable Mention in the UNESCO Heritage Awards in 2007.[6]

Mrs Belinda Charles took over as Principal in 2001 at the request of the Board of Governors. Previously she was Principal of Saint Andrew's Junior College. She was also the President of the Academy of Principals, Singapore. Mrs Charles retired in December 2010[7] and was succeeded by Mrs Lucy Toh in 2011.[8] Mrs Lucy Toh is the School's 15th Principal. She is the daughter of the late Senior Minister of State for Education, Dr Tay Eng Soon, and she was also a President's Scholar.[9]

The St Andrew's Village has the first artificial rugby pitch in Singapore, shared between the secondary school and the Junior School. It opened in January 2008 at a cost of S$1 million and provides an all-weather surface.[10]

A British observer has commented that St Andrew's is highly regarded for its sporting trophies as well as its academic results, and that "With its passion for rugby and cricket, and more than a hint of what used to be called 'muscular Christianity', it probably comes as close as any [school in Singapore] to the authentic ethos of a traditional British boys' school, encapsulated in the splendid School Song".[11]

Students and former students are known as "Saints".

Although St Andrew's is an Anglican school, students do not have to be Christians.[12]

The school badge includes the cross of St Andrew (the Scottish flag). The school motto is "Up And On", the title of the School Song.

The official heraldic description of the badge is as follows:
Azure, a saltire argent, in chief keys, in base a tiger's face
Crest: on a wreath of the colours a torch
Colours are representative of the Patron Saint of Scotland, Saint Andrew.

The two gold keys refer to Saint Peter's Key, while the white cross refers to the cross of Saint Andrew. They symbolize righteousness. The tiger is a signature trademark of Saint Andrew's, signifying ferocity and endurance.

There is a school newsletter, Saints Times. Every year the school also produces a school magazine which was called '"Up and On" in the earlier years, after the school motto.[13]

All students wear white short-sleeved shirts bearing the school badge. Lower secondary boys (Secondary 1 and 2) must wear dark blue short trousers with white socks;[15] Bermuda shorts are not permitted. Upper secondary boys (Secondary 3, 4 and 5) now wear long trousers, also in dark blue, although Secondary 3 students have been allowed to do so only since the 1990s.[15] The prefects in Secondary 3 and 4 wear white long trousers. The school tie is to be worn on Mondays and at special events.[16]

The school regards its system of Prefects as an important element in maintaining an ethos of service and high standards of conduct.[17]

The school's Pupil Welfare Department aims to create a sense of belonging and promote moral education and community service.

Saint Andrew's maintains strict rules for behaviour inside and outside school. There is a new system of demerit points, used in combination with the school's long-standing[18] policy of corporal punishment in the form of strokes of the cane. For 3 or 4 demerit points the penalty is Corrective Work Action or caning on the palm of the hand. Five or more demerit points mean a caning across the seat of the thin uniform trousers.[16]

St Andrew's is very unusual for a Singapore school in that canings may be applied on the palm of the hand as well as across the seat. Canings on the hand, often delivered "on the spot", are less serious and are for more or less trivial offences. Posterial caning, normally inflicted more ceremonially in the office or the Time-Out Room, is the norm for offences of any significance. Sometimes both are combined, as when a student receives two strokes on the hand and two on the buttocks.

Students who are late to school four times in a term receive a caning, and are caned again on each subsequent lateness for that term. Students caught smoking or in possession of tobacco products are referred to the Health Science Authority to be fined and counselled, as well as being caned across the buttocks. For very serious offences such as drug abuse, or a second or subsequent offence of fighting or gangsterism, the caning is delivered in front of the whole school ("public caning"); otherwise it may be carried out in class, such as for a first offence of fighting or bullying. Public caning on the buttocks is also administered whenever a case is referred to the police. For a repeat serious offence the student may be publicly caned and then either suspended or expelled.[16] 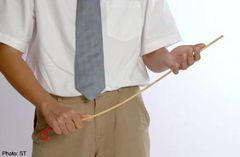 The school got more press publicity in May 2011 when two SA boys aged 14 and 15 had engaged in a public dispute on Facebook which culminated in threats of violence. In the end they realised that matters had got out of hand after the school was informed, and both students agreed to bring the case to a close by submitting to a one-stroke caning across the backside. The punishments were duly delivered in the Discipline Master's office on 30 May. One commenter to online forums thought this was wrong and that the boy's behaviour online and out of school was no business of the school, but most felt the school had acted wisely to nip the problem in the bud,[19] although one stroke is a mild punishment at SASS. Three-stroke canings are not uncommon, and the legal maximum is six. The New Paper illustrated this news report with a posed picture of a man with a cane (right), but this is misleading because the implement shown is a small domestic cane for parental/family use; the secondary-school rattan is bigger and heavier than this.

For cases where the offence has a victim or where there is conflict to be resolved, a system of Restorative Practices is in place. "In the process of resolving the conflict, the offenders are asked to suggest the appropriate consequences for their action, which may include any form of punishment. However, any students who fail to co-operate with the teacher will be dealt with differently."[20]

We are arming for the fight, Pressing on with all our might, Pluming wings for higher flight, Up and On!

Fair before us lies the way Time for work and time for play; Fill the measure while we may, Up and On!

Life and time will not delay. Time is running fast away, Life is now, today;today; Up and On!

Foes in plenty we shall meet, Hearts courageous scorn defeat; So we press with eager feet, Up and On!

In 2008, St Andrew's was one of eight schools in Singapore to offer three new subjects at GCE O Level: Creative 3D Animation, Fundamentals of Electronics, and Introduction to Enterprise Development.[21]

In 2009, St Andrew's gained an Academic Value-Added Sustained Achievement Award from the Ministry of Education.[22]

In 2010 the school was commended for including the St Andrew's River Programme in its Science curriculum. Students investigated the impact on the Kallang River eco-system and water quality of the building of the Marina Barrage and the enclosure of the Marina Basin.[23]

In 2011 the school won the Special Lee Hsien Loong Award for Innovations in Normal Course.[25] 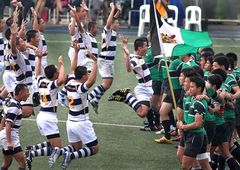 This achievement was repeated in April 2012, when St Andrew's beat Raffles Institution by 15-7 to win the National B Division rugby final once again.[29]

The school has been awarded Niche Status in rugby by the Ministry of Education.[30]

The Drama team achieved Gold for the Singapore Youth Festival in 2007 and again in 2011.

The school won the Sustained Achievement Award for Uniform Groups and Sports, and the Value-Added Award for Academic Achievement (Special/Express), in 2011.[33]

The Saint Andrew's School Military Band, previously a brass band, was renamed a military band 1978. In June 1990, Mr David Anthony Glosz took over the role of bandmaster. Mrs Felice Isaac, a Trustee of the Rueben Manasseh Trust Fund, wanted to donate a sum of S$65,000 at the same period and then-principal Mr Harry Tan was asked if the school was interested in accepting the donation. That sum became the seed money to begin buying quality instruments that would improve the band's musical quality and bring it to its first gold.

Recently, Mr Brando Tan has stepped up as the Band's new Bandmaster.