Corporal punishment with a rattan cane is a prominent and long-standing feature of Singapore life.

There are five different types of caning in Singapore. All but one of these apply to males only and are administered to the posterior.

Judicial and prison canings are applied to the bare buttocks.

Military caning is applied to the buttocks through a special cloth guard to reduce bleeding.

School caning is delivered to the seat of the boy's ordinary school uniform trousers, or at some schools (such as Victoria School and Damai Sec.) he has to change into PE shorts with no underpants to receive the punishment.

Institutional caning is administered to the seat of the trousers (boys) or to the hand (girls).

The judicial cane is a rattan 1.2 metres long and half an inch thick. It is soaked in water to make it more pliant. The maximum number of strokes is 24. The de facto minimum is three. Courts may order caning for a wide range of offences including rape, robbery, repeated drug use, vandalism and rioting. Illegal immigrants and overstayers are also routinely caned, though usually only 3 strokes.

Females of any age, and males aged over 50, may not be caned. Boys under 16 may be caned with a "light cane" but only by the High Court, not by lower courts.

The largest number of judicial canings takes place in Changi Prison, at a punishment session held every Tuesday and Friday. Canings also occur at other prisons. About 100 men are disciplined at each session at Changi. The person to be caned is secured in a bending-over position to a special frame, so that his bare buttocks are presented for punishment. A special pad is fixed over the lower back to protect the kidneys. The strokes are inflicted by a specially trained prison officer. A prison doctor is present to ensure the health and safety of the prisoner, and is empowered to stop the caning at any time if the prisoner's health is in danger.

A caning sentence is always combined with a prison sentence. The corporal punishment element is usually administered fairly early on in the jail term, once any avenue of appeal has been exhausted.

There are about 6,000 corporal punishment cases per year. A large number of these are relatively minor 3-stroke canings for illegal overstayers. Punishments of 20 or 24 strokes for very serious offences, though far more likely to be reported in the press, are much less common. Most court cases in Singapore are not reported in newspapers.

A lot of false information has been published over the years, especially in the American press and on the internet, about judicial corporal punishment in Singapore.

There is no such thing as "public caning" in Singapore, and never has been. Every caning is a strictly private event behind prison walls.

Nobody is ever caned for dropping litter, jaywalking or using chewing gum. These are not caneable offences. In fact, the mere personal use of chewing gum is not an offence at all: its importation into Singapore is an offence, but not a caneable one.

It is not true that if a prisoner loses consciousness while being caned the rest of the strokes are given at a later date. In such a case the doctor will remit the remainder of the corporal punishment sentence and the prisoner may be referred back to the court to have his prison sentence increased instead.

It is not true that the officers administering the caning need to be martial arts experts.

Canings are not administered in instalments. If the maximum 24 strokes are ordered, all 24 strokes will be carried out in one session.

Bamboo is never used. It is too brittle to be suitable for corporal punishment use. All canes are made of rattan.

Caning is not life-threatening. Nobody is recorded as having died as a result of being officially caned in Singapore. 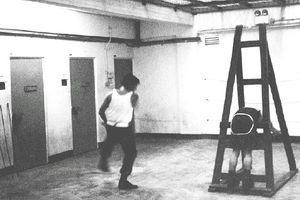 Singapore is one of very few remaining countries, or possibly the only country, where formal corporal punishment is an official penalty in the armed forces.

Male soldiers, sailors and airmen may be ordered to be caned by a military court martial. In addition, those held in a Disciplinary Barracks may be caned by the officer in charge, subject to approval by the Army Council, for breach of the rules while in custody.

All military caning is inflicted at the SAF Court Martial Centre at 90 Chua Chu Kang Way in Kranji. The punishment is administered across the offender's seat. He is strapped into a trestle in a bending-over position just as in prison/judicial caning, but unlike in prison/judicial caning he is not stripped naked. Instead his trousers and underpants only are removed, and a special cloth guard is placed over the buttocks to reduce wounding and bleeding.

When this form of discipline was introduced in 1972 it was intended primarily for disobedient teenage National Service conscripts, but has occasionally also been applied to professional servicemen in their twenties.

Corporal punishment is commonplace in many Singapore secondary schools, and also some primary schools. It applies only to male students. Singapore law forbids the caning of girls. (Regulation No 88 under the Schools Regulation Act 1957.)

Following traditional British practice, the punishment is applied across the young man's clothed buttocks with a rattan cane about 1 metre long, with the miscreant bending over a desk or chair.

Under Ministry rules, there is a maximum of six strokes per caning. In practice, the majority of canings are of either one, two or three hard strokes, typically delivered by a specially designated and trained "Discipline Master", for whom this skilled task is a recognised part of his job description. Ordinary teachers are strictly forbidden to use corporal punishment in Singapore.

Ministry regulations also permit caning on the palm of the hand, but in practice this is very rare, at any rate at secondary level. (The main exception is Saint Andrew's Secondary School, where both methods are used.)

Schools generally discipline boys in this manner for offences such as smoking, fighting, bullying, truancy, repeated latecoming, vandalism, stealing, disrespect and gangsterism. The majority of recipients are aged 13 to 17 inclusive, with 15 as the peak year.

School caning produces temporary intense pain, which is intended to deter the student from repeating the offence. Pain and soreness over the posterior is likely to continue for several hours, especially after a caning of several strokes. This serves as a reminder to the student that his behaviour was unacceptable. There will be "tramline" marks across the target area for several days, and there may also be transient bruising, but there is no danger of injury.

In some cases, a boy may be caned in front of his classmates or even the whole school. This is known as "class caning" or "public caning" respectively. It has the additional benefit of warning other students that poor conduct is not tolerated. However, not all schools do this, and the majority of corporal punishments are administered privately in the school office.

Quite often, caning is combined with detention or suspension. The Ministry of Education recommends that it be followed and/or preceded by counselling.