It also shares the building with Hillion Residences on its rooftop. 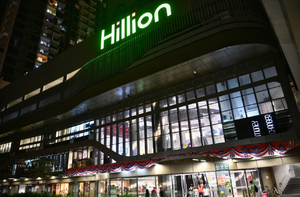 It is the first mixed-use development in western Singapore to integrate a retail mall, residential living, bus interchange and both MRT and LRT stations.

The mall consists of four storeys, two above ground and two below ground. It also has an underground carpark. It has open spaces meant for events and promotional sales, such as the MRT Plaza and an atrium.

Basement 2 mainly consists of NTUC FairPrice, some fast food outlets and smaller shops for fashion and accessories and food and beverages.

The first floor of the mall is split into two sections, Seoul Street and Asian Fusion, being separated by the bus interchange in the middle. Both sections mainly consist of restaurants.

Originally, the plot of land Hillion is located on used to house the former Bukit Panjang Bus Interchange, which opened on 26 December 1999. Only after 12 years of operations, the interchange closed down on 16 December 2012, just 10 days shy of its thirteenth year of operations. All bus routes originating from there were redirected to begin from bus stops near the old interchange. Most bus services operated from the former Bukit Panjang Temporary Bus Park.

Construction of the integrated transport hub began in 2013 and was completed in 2017.